Mistakes Can Kill You 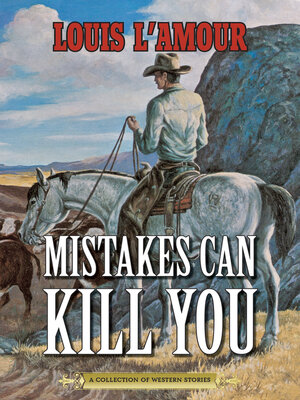 View more libraries...
Nine edge-of-your-seat thrillers from the greatest Western author ever.
There will never be another Western writer like Louis L'Amour. A legendary author and indisputably the greatest storyteller in his genre of all time, L'Amour captivated millions of readers and has sold well over three hundred million copies of his works, which includes nearly ninety novels and countless short stories.
Mistakes Can Kill You highlights an essential selection featuring nine of L'Amour's earlier short stories, sometimes written under the pen name Jim Mayo, that exemplify the rugged morality of the best Western writing. In "Black Rock Coffin-Makers," two men ready to kill over ownership of a ranch get more than they bargain for when a stranger is caught in the crossfire. And in "Four-Card Draw," Allen Ring wins a ranch in a poker game, only to find out an unsolved murder was committed there years ago and law enforcement thinks Ring knows more about it than he's letting on.
L'Amour made his characters come alive on the page, and his ability to capture the spirit and authenticity of the Wild West is unrivaled. Mistakes Can Kill You transports you to a world you'll never want to leave, and proves that Louis L'Amour will always be the king of spinning a classic Western yarn.
"L'Amour is popular for all the right reasons. His books embody heroic virtues that seem to matter now more than ever." —The Wall Street Journal
"L'Amour is the kind of storyteller who makes the wolves come out of the woods to listen." —People magazine