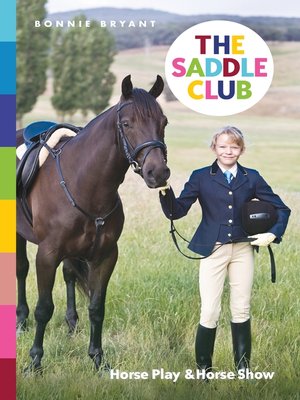 The Saddle Club stars three heroines, Stevie, Carole and Lisa, who form The Saddle Club at the Pine Hollow Stables. Each character has a distinctly different personality but all share an equal love of horses and a strong loyalty to each other.The Saddle Club rides to the rescue!Stevie, Carole and Lisa - founders of the Saddle Club - would do anything to help a friend in need. And now it looks as if they're going to get their chance when Stevie overhears a disturbing conversation between Max, Pine Hollow's owner, and a mysterious caller. Is their riding instructor really in serious financial trouble? Pine Hollow could be lost! Determined to help bail out Max, the Saddle Club is soon drumming up new business and arranging a riding demonstration starring themselves!The Saddle Club girls get set for some big city excitement!Stevie, Carole and Lisa are thrilled when they get the chance to attend the American Horse Show in New York City with Mrs Reg and their teacher Max. Not only is it the most important horse show in the country, but Max's ex-student Dorothy DeSoto is going to compete, and the girls are invited backstage. They have fun exploring Greenwich Village and go riding in Central Park. Lisa finds herself coming to the rescue of an inexperienced rider - who turns out to be their all-time favourite teen heart-throb, Skye Ransom! Skye is practising for a scene in his new movie where he has to ride a horse . . . and he's terrified. Can the girls teach him to ride before the cameras start rolling?