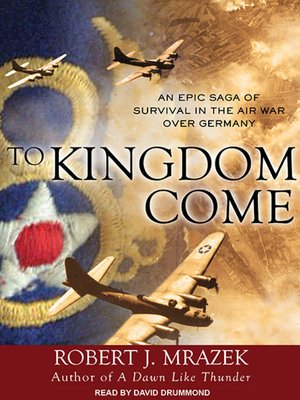 An Epic Saga of Survival in the Air War Over Germany

HistoryMilitaryNonfiction
On September 6, 1943, three hundred and thirty-eight B-17 "Flying Fortresses" of the American Eighth Air Force took off from England, bound for Stuttgart, Germany, to bomb Nazi weapons factories. Dense clouds obscured the targets, and one commander's critical decision to circle three times over the city-and its deadly flak-would prove disastrous. Forty-five planes went down that day, and hundreds of men were lost or missing. Focusing on first-person accounts of six of the B-17 airmen, award-winning author Robert J. Mrazek vividly re-creates the fierce air battle and reveals the astonishing valor of the airmen who survived being shot down-and the tragic fate of those who did not.
HistoryMilitaryNonfiction

Robert J. Mrazek, a navy veteran and former congressman, is the author of Stonewall's Gold and Unholy Fire.

More about Robert J. Mrazek
To Kingdom Come
Copy and paste the code into your website.
New here? Learn how to read digital books for free