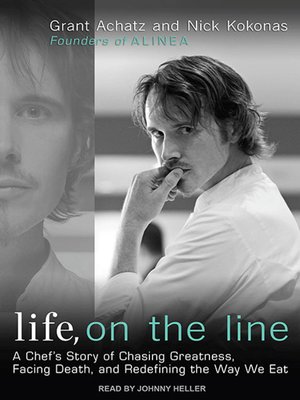 Life, on the Line

A Chef's Story of Chasing Greatness, Facing Death, and Redefining the Way We Eat

Biography & AutobiographyBusinessNonfiction
In 2007, chef Grant Achatz seemingly had it made. He had been named one of the best new chefs in America by Food & Wine in 2002, received the James Beard Foundation Rising Star Chef of the Year Award in 2003, and in 2005 he and Nick Kokonas opened the conceptually radical restaurant Alinea, which was named Best Restaurant in America by Gourmet magazine. Then, positioned firmly in the world's culinary spotlight, Achatz was diagnosed with stage IV squamous cell carcinoma-tongue cancer. The prognosis was grim, and doctors agreed that the only course of action was to remove the cancerous tissue, which included his entire tongue. Desperate to preserve his quality of life, Grant undertook an alternative treatment of aggressive chemotherapy and radiation. But the choice came at a cost. Skin peeled from the inside of Grant's mouth and throat, he rapidly lost weight, and most alarmingly, he lost his sense of taste. Tapping into the discipline, passion, and focus of being a chef, Grant rarely missed a day of work. He trained his chefs to mimic his palate and learned how to cook with his other senses. As Kokonas was able to attest, the food was never better. Five months later, Grant was declared cancer-free, and just a few months following, he received the James Beard Foundation Outstanding Chef in America Award. Life, on the Line tells the story of a culinary trailblazer's love affair with cooking, but it is also a book about survival, about nurturing creativity, and about profound friendship. Already much-anticipated by followers of progressive cuisine, Grant and Nick's gripping narrative is filled with stories from the world's most renowned kitchens-the French Laundry, Charlie Trotter's, el Bulli-and sure to expand the audience that made Alinea the number-one selling restaurant cookbook in America last year.
Biography & AutobiographyBusinessNonfiction

Nick Kokonas is a managing partner of Achatz LLC, which was formed to envision, create, and manage the restaurant Alinea in Chicago. Together with award-winning chef Grant Achatz, Nick coordinated the creation of Alinea, including the formation an...

Grant Achatz is an award-winning chef and the owner of the restaurant Alinea in Chicago. He was named Best Chef in the United States in 2008 by the James Beard Foundation, and he is a columnist for the Atlantic's Food Channel.

More about Grant Achatz
Life, on the Line
Copy and paste the code into your website.
New here? Learn how to read digital books for free