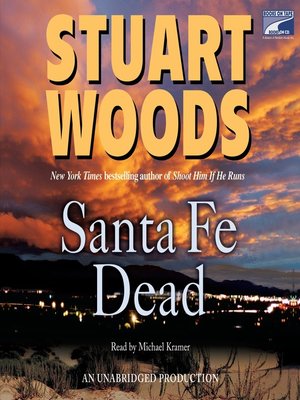 FictionMysterySuspenseThriller
New York Times bestseller Stuart Woods returns with a dynamic thriller starring take-no-prisoners attorney Ed Eagle.
In this new thriller featuring the colorful Santa Fe trial lawyer, Ed Eagle finds the tables turned when he testifies as a witness for the prosecution in the trial of his ex-wife, Barbara Eagle, who has been a very, very bad girl. The trial ends in a way Ed had not anticipated, and Barbara is still in a position to make his life, and that of others, a living hell.
With private detectives, hit men, double crosses, and billion-dollar-bank accounts involved, Ed calls in every favor and follows every lead, no matter where they take him. From the posh resorts of desert California and the lush wine country of Napa, to the New Mexico high country and the seedy hotels of Tijuana, Ed Eagle won't rest until he's discovered the truth about what Barbara is up to–and settled the score.
With SANTA FE DEAD, Stuart Woods once again proves he's the master of an unstoppably good read.
From the Compact Disc edition.
FictionMysterySuspenseThriller

Santa Fe Dead
Copy and paste the code into your website.
New here? Learn how to read digital books for free