By Louisa May Alcott 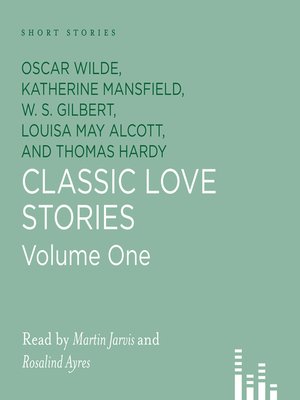 A great collection of short stories based on the theme of love read by Martin Jarvis and Rosalind Ayres.
These are not archetypal love stories full of sentimentality, but the clever, poignant, humorous and even romantic stories set in an age of chivalry and honour. There are aspects of humour and respect in Mr. & Mrs. Dove, love from afar in the poignant tale, Angela, and a woman clouded in mystery in The Sphinx Without a Secret. Also comedy from an inebriated Tom Smart talking to the furniture in The Bagman's Story from Dickens' Pickwick Papers, tragedy from Phyllis and her love for a German Hussar, greed from the parents of Joe who want him to marry the wealthy Polly instead of his choice, Genefer, and drugs when two young people fall in love under the influence of hashish in a little known but ahead of its time story Perilous Play.
Stories included:
The Sphinx Without a Secret by Oscar Wilde
Mr & Mrs Dove by Katherine Mansfield
Angela by W.S. Gilbert
Perilous Play by Louisa May Alcott
The Singing Lesson by Katherine Mansfield
The Melancholy Hussar of the German Legion by Thomas Hardy
Genefer by Sabine Baring-Gould
The Bagman's Story from Pickwick Papers by Charles Dickens