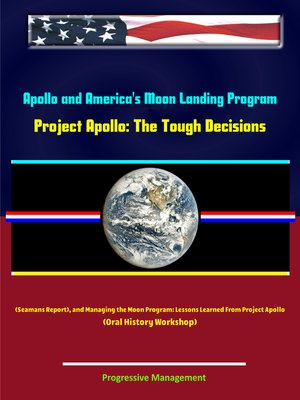 Seamans book: The foreword notes, "Robert C. Seamans, Jr., has written a uniquely comprehensive report of the Apollo Manned Lunar Landing Program. It goes well beyond the normal reporting that we have seen of the events leading to and results achieved in that major national space program. Bob Seamans has relied on his very personal involvement, responsibility, and experience during his long tenure in the top leadership of the National Aeronautics and Space Administration (NASA), first as an Associate Administrator and then as the Agency's Deputy Administrator, from less than two years after NASA was formed until January 1968, to present a detailed timeline of the key elements of NASA's extensive analyses, decisions, activities, capabilities, and responsibilities that led to the creation of the program and its outstanding success. In fact, this manuscript presents the most detailed and specific assembly of personal and archival records to identify the comments, events, meetings, decisions, and actions taken in the initiation and conduct of the program. This detailed report demonstrates NASA's broad capabilities and, despite his unassuming presentation, also shows Bob Seamans's strong contributions. Both of those demonstrated characteristics have always been clear to all of us who worked in NASA.

The report reviews the major Mercury and then Gemini precursors for the Apollo mission program and its development and mission sequence. But, very importantly, it describes the major and often complex deliberations that encouraged inputs from the broad range of informed internal Agency individuals in order to arrive at the resulting actions taken; it recognizes differences among their various views, including even sensitivities within the leadership of the Agency, and it acknowledges NASA's relationships with the President and key executive branch personnel, as well as the very important and often complex relationships with members of Congress."

Logsdon book: "While there have been many studies recounting the history of Apollo, at the time of the 30th anniversary of the first lunar landing by Apollo 11, it seems appropriate to revisit the process of large-scale technological management as it related to the lunar mission. Consequently, the NASA History Office has chosen to publish this monograph containing the recollections of key participants in the management process. The collective oral history presented here was recorded in 1989 at the Johnson Space Center's Gilruth Recreation Center in Houston, Texas. It includes the recollections of key participants in Apollo's administration, addressing issues such as communication between field centers, the prioritization of technological goals, and the delegation of responsibility."