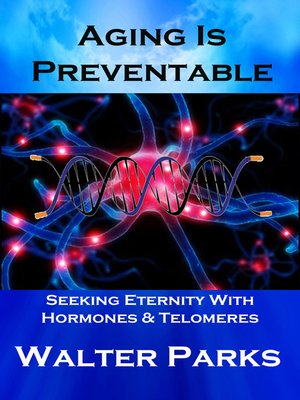 The Human Genome Project and follow on findings have shown us that the principal causes of aging are hormone decline and telomere erosion.

A series of tests have proved that we can now prevent aging.

The cover pictures the hormones and telomeres which are at the heart of aging.

I wrote this book because my advanced age (78) has subjected me to the horrors of aging. I needed to find a way to slow my aging.

I actually found not only a way to slow my aging, but had some success in reversing some elements of it. If we slow and reverse aging for just a short time, we can be around when the new technologies now in development become available.

Many researchers believe we can eliminate aging. Some believe that the first immortals are alive today.

I wrote this book primarily for the baby boomers and their caregivers.

I have worked on it for several years and it has taken me an additional 3 years to write. The hardest part of writing it was trying to find an everyday version of the rather technical language involved in the research and in descriptions of our anatomy.

A series of tests have already proved that we can slow and eventually prevent aging.

This book describes the aging processes and identifies what you can do to slow and eventually prevent your aging.

More about Walter Parks
Aging is Preventable
Copy and paste the code into your website.
New here? Learn how to read digital books for free