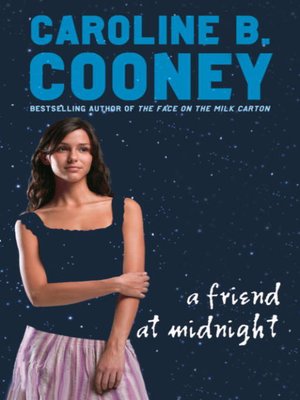 A Friend at Midnight

by Caroline B. Cooney

Lily has settled into life in Connecticut after her parent's divorce but it's been harder on her eight-year-old brother Michael. After their mother remarries, her brother chooses to go live with his father in Washington, D.C., until the day he calls home from the Baltimore-Washington Airport where his father has abandoned him.

Lily is home babysitting her baby stepbrother when she answers the phone. She has no idea the extent to which her faith in God will be tested. There is no choice for Lily. She will rescue Michael, but will she be able to rescue herself from the bitterness and anger she feels?

Caroline B. Cooney is the bestselling and award-winning author of numerous books for young people. The author lives in Westbrook, CT and New York City.From the Hardcover edition.

More about Caroline B. Cooney
A Friend at Midnight
Copy and paste the code into your website.
New here? Learn how to read digital books for free