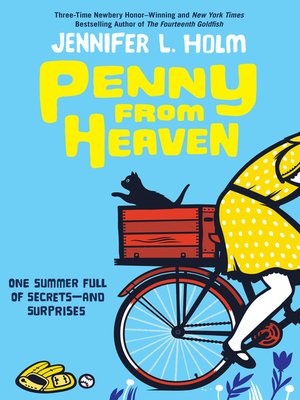 View more libraries...
Newbery Honor–winning, New York Times–bestselling, and as full of fun and adventure as it is of deeper family issues.

School’s out for summer, and Penny and her cousin Frankie have big plans to eat lots of butter pecan ice cream, swim at the local pool, and cheer on their favorite baseball team—the Brooklyn Dodgers! But sometimes things don’t go according to plan. Penny’s mom doesn’t want her to swim because she’s afraid Penny will get polio. Frankie is constantly getting into trouble, and Penny feels caught between the two sides of her family. But even if the summer doesn’t exactly start as planned . . . things can work out in the most unexpected ways!

Set just after World War II, this thought-provoking novel also highlights the prejudice Penny’s Italian American family must confront because people of Italian descent were “the enemy” not long ago.

Inspired by three-time Newbery Honor winner Jennifer Holm’s own Italian American family, Penny from Heaven is a story about families—about the things that tear them apart and the things that bring them back together.

Includes an author’s note with photographs and background on World War II, internment camps, and 1950s America, as well as additional resources and websites.

Booklist:
“Holm impressively wraps pathos with comedy in this coming-of-age story, populated by a cast of vivid characters.”