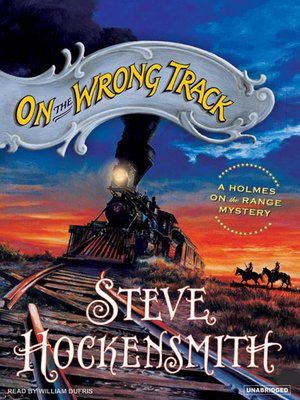 On the Wrong Track

FictionLiteratureMysteryWestern
Gustav "Old Red" Amlingmeyer is an old-fashioned kind of guy: He prefers a long trail ride even when a train ticket can get him where he's going in one-tenth the time. So when it's Old Red who insists on guarding the Pacific Express, despite a generations-old family distrust of the farm stealin', cattle-killin', money-grubbing' railroads, Big Red is flummoxed. But as usual, he'll follow his ornery brother just about anywhere. Trapped on a thousand tons of steam-driven steel, Old Red and Big Red find themselves riding with a crafty gang of outlaws, a baggage car jam-packed with secrets, and a killer hidden among the colorful passengers. Filled with all the wit, flavor, humor, and suspense that made Holmes on the Range such a critical hit, On the Wrong Tack will have you rushing to the station!
FictionLiteratureMysteryWestern

Steve Hockensmith writes a monthly column for Alfred Hitchcock's Mystery Magazine, and he is the author of Holmes on the Range, an Edgar Award finalist and the beginning of his highly successful Holmes on the Range mystery series.

More about Steve Hockensmith
On the Wrong Track
Copy and paste the code into your website.
New here? Learn how to read digital books for free