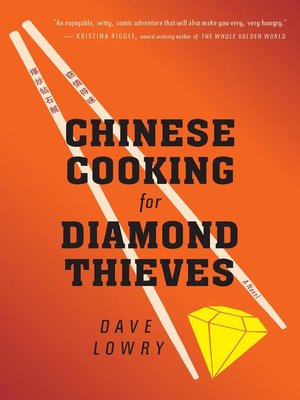 Driving home after being kicked out of college, Tucker meets and picks up the mysterious Corinne Chang at a rest stop. Infatuated, and with nothing better to do, he ends up with her in St. Louis, where he gets a job as a chef in a Chinese restaurant. Even though he's a gwai lo—a foreign devil—his cooking skills impress the Chinese patrons of the restaurant, and his wooing skills impress Corinne when she joins him there as a waitress. But when Chinese gangsters show up demanding diamonds they believe Tucker's kind-of, sort-of, don't-call-her-a-girlfriend stole, he and his friends—which luckily include a couple of FBI agents—have to figure out just who is gunning for Corinne and how to stop them. Good thing Tucker is a Mandarin-speaking martial arts master who isn't afraid to throw the first punch.

With its one-of-a-kind hero, Chinese Cooking for Diamond Thieves is perfect for anyone who loves cooking, Chinese culture, bad jokes, and young love. Diamonds are forever . . . unless Chinese mobsters decide they want them back.