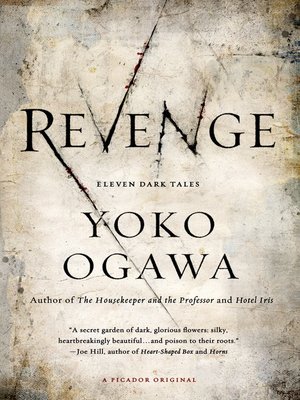 "It's not just Murakami but also the shadow of Borges that hovers over this mesmerizing book... [and] one may detect a slight bow to the American macabre of E.A. Poe. Ogawa stands on the shoulders of giants, as another saying goes. But this collection may linger in your mind — it does in mine — as a delicious, perplexing, absorbing and somehow singular experience." —Alan Cheuse, NPR

Sinister forces collide—-and unite a host of desperate characters—-in this eerie cycle of interwoven tales from Yoko Ogawa, the critically acclaimed author of The Housekeeper and the Professor.

An aspiring writer moves into a new apartment and discovers that her landlady has murdered her husband. Elsewhere, an accomplished surgeon is approached by a cabaret singer, whose beautiful appearance belies the grotesque condition of her heart. And while the surgeon's jealous lover vows to kill him, a violent envy also stirs in the soul of a lonely craftsman. Desire meets with impulse and erupts, attracting the attention of the surgeon's neighbor—-who is drawn to a decaying residence that is now home to instruments of human torture. Murderers and mourners, mothers and children, lovers and innocent bystanders—-their fates converge in an ominous and darkly beautiful web.

Yoko Ogawa's Revenge is a master class in the macabre that will haunt you to the last page.

Yoko Ogawa's fiction has appeared in The New Yorker, A Public Space, and Harper's Magazine. Since 1988, she has produced more than twenty works of fiction and nonfiction, which have been published in several countries. Her novel Hotel Iris was sho...

More about Yoko Ogawa
Revenge
Copy and paste the code into your website.
New here? Learn how to read digital books for free