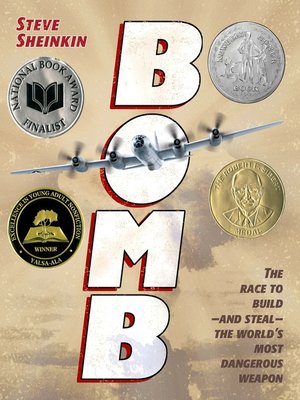 Perfect for middle grade readers and history enthusiasts, New York Times bestselling author Steve Sheinkin presents the fascinating and frightening true story of the creation behind the most destructive force that birthed the arms race and the Cold War in Bomb: The Race to Build—and Steal—the World's Most Dangerous Weapon.
A Newbery Honor book
A National Book Awards finalist for Young People's Literature
A Washington Post Best Kids Books of the Year title
In December of 1938, a chemist in a German laboratory made a shocking discovery: When placed next to radioactive material, a Uranium atom split in two. That simple discovery launched a scientific race that spanned three continents.
In Great Britain and the United States, Soviet spies worked their way into the scientific community; in Norway, a commando force slipped behind enemy lines to attack German heavy-water manufacturing; and deep in the desert, one brilliant group of scientists was hidden away at a remote site at Los Alamos. This is the story of the plotting, the risk-taking, the deceit, and genius that created the world's most formidable weapon. This is the story of the atomic bomb.
"This superb and exciting work of nonfiction would be a fine tonic for any jaded adolescent who thinks history is 'boring.' It's also an excellent primer for adult readers who may have forgotten, or never learned, the remarkable story of how nuclear weaponry was first imagined, invented and deployed—and of how an international arms race began well before there was such a thing as an atomic bomb." —The Wall Street Journal
"This is edge-of-the seat material that will resonate with YAs who clamor for true spy stories, and it will undoubtedly engross a cross-market audience of adults who dozed through the World War II unit in high school." —The Bulletin (starred review)
Also by Steve Sheinkin:
The Notorious Benedict Arnold: A True Story of Adventure, Heroism & Treachery
The Port Chicago 50: Disaster, Mutiny, and the Fight for Civil Rights
Undefeated: Jim Thorpe and the Carlisle Indian School Football Team
Most Dangerous: Daniel Ellsberg and the Secret History of the Vietnam War
Which Way to the Wild West?: Everything Your Schoolbooks Didn't Tell You About Westward Expansion
King George: What Was His Problem?: Everything Your Schoolbooks Didn't Tell You About the American Revolution
Two Miserable Presidents: Everything Your Schoolbooks Didn't Tell You About the Civil War
Born to Fly: The First Women's Air Race Across America