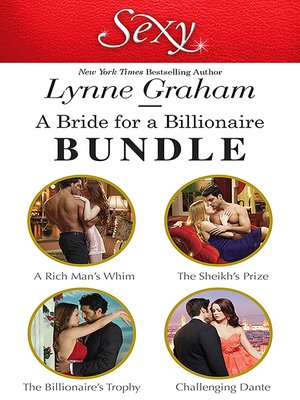 A Bride For a Billionaire Bundle--4 Book Box Set

Bride for a Billionaire

Kat Marshall has sacrificed everything for her younger sisters. And with money tighter than ever, she's in desperate need of help. Innocent Kat has hidden her dreams away until she meets enigmatic Russian billionaire, Mikhail Kusnirovich, whose outrageous offer could make them all come true... Mikhail doesn't have dreams. He has money, lots of it, and he always gets what he wants. Bedding Kat should be easy, but the tempting red–head is impossible to seduce! So Mikhail offers to pay off her debts in exchange for a month on his yacht – and in his cabin, virginity included!

When Sheikh Zahir Ra'if Quarishi took a Western woman as his wife, it caused outrage amongst his people. Marrying Sapphire Marshall turned out to be the biggest mistake of Zahir's life. As cold and untouchable as her jewelled namesake, Sapphire fled the kingdom before sharing the marriage bed. Leaving Zahir to face the shame alone – and his bank account five million dollars lighter. Now, his ex–wife has been spotted in his desert and before she can run again, Zahir plans to banish her from his mind once and for all. Beginning with reclaiming his wedding night!

What is his intern's photo doing on an escort website? Bastian Christou doesn't know if he's more surprised by her double life, or her stunning photo – she's kept those curves well hidden! He has an ex–fiancée to keep at bay and Emmie Marshall might just be the best armour money can buy. Emmie is outraged when Bastian, her uncompromising boss, confronts her. She had no idea her photo was online. But his cheque's been cashed and he's come to collect his prize...a weekend in Greece, with her...alone. Their relationship might be fake, but Emmie's trepidation is all too real!

Unimpressed by his mother's new companion, shrewd Italian billionaire Dante Leonetti is determined to oust the cuckoo from his castle. After all, what could this beautiful, intelligent young woman want with his family other than a slice of their fortune? Topaz 'Topsy' Marshall's search for her father brought her into Dante's world, now she's experiencing Leonetti's ferocious reputation first hand. Knowing Dante thinks she's a gold–digger, she is shocked when he turns on his legendary charm. Dante is determined to seduce the truth from her lips and Topsy must do everything in her power to resist.

A Bride For a Billionaire Bundle--4 Book Box Set
Copy and paste the code into your website.
New here? Learn how to read digital books for free