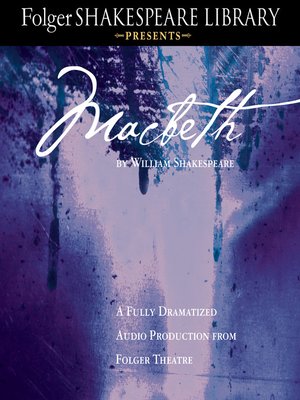 DramaFiction
FOLGER SHAKESPEARE LIBRARY
The World's Leading Center for Shakespeare Studies
The Folger Shakespeare Library, home to the world's largest Shakespeare collection, brings Macbeth to life with this new full-length, full-cast dramatic recording of its definitive Folger Edition.
Macbeth, one of Shakespeare's most popular plays, is among the most powerful and influential tragedies in the English language. Promised a golden future as ruler of Scotland by three sinister witches, Macbeth murders the king in order to succeed to the throne. Tortured by his conscience and fearful of discovery, he becomes fatally enmeshed in a web of treachery and deceit.
This new full-cast recording—based on the most respected edition of Shakespeare's classic—expertly produced by the Folger Theatre, is perfect for students, teachers, and the everyday listener.
DramaFiction

More about William Shakespeare
Macbeth
Copy and paste the code into your website.
New here? Learn how to read digital books for free