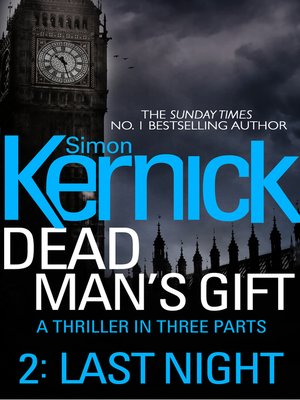 A THRILLER IN THREE PARTS

The SECOND direct to digital short-story in a race-against-time three-part adventure from the bestselling author of Relentless, Siege and Ultimatum, Simon Kernick.

MP Tim Horton is waiting to hear from his son's kidnappers. Knowing he's being watched, and too scared to go to the police, he contacts the only man who may be able to help him, his brother-in-law: an ex-soldier called Scope who has a reputation for sorting things out and getting things done .

Simon Kernick is one of Britain's most exciting thriller writers. He arrived on the crime writing scene with his highly acclaimed debut novel The Business of Dying, the story of a corrupt cop moonlighting as a hitman. Simon's big breakthrough came...

More about Simon Kernick
Last Night
Copy and paste the code into your website.
New here? Learn how to read digital books for free