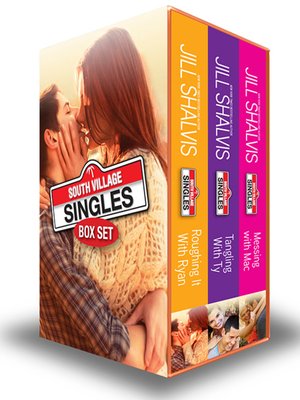 Roughing It With Ryan

Suzanne Carter has sworn off men...really! Her inability to take life seriously drives them crazy, so it's best she leaves them alone. Then one night, strong, handsome Ryan Alondo rescues her and she simply melts. Who could resist all that rough-and-tumble sexiness? But as tempting as he is, she's not going to fall for his charms. Because there's no way she wants to ruin a man this gorgeous.

From the moment Ryan sets eyes on Suzanne, he knows she's the one for him. She's fun and sexy and exactly what he needs in his overcrowded, responsible life. And the passion between them can't be ignored. He just has to convince her he's serious enough for both of them. Good thing he can be very, very persuasive....

Dr. Nicole Mann is simply too busy for romance. Her work as a surgeon consumes her entire world and she prefers it that way. That is, until she meets too-charming-for-his-own- good Ty O'Grady. This sexy architect with his enticing Irish accent has her thinking of something other than medicine. So she'll prescribe herself an intense—but temporary—round of seduction to cure this Ty fever once and for all.

Stubborn, strong and entirely too desirable, Nicole is Ty's match. When one hot touch leads to another, and another, this footloose drifter suddenly is thinking of a relationship with a design to forever. So he's pulling out all the sensual stops and will do anything to show her a temptation that's irresistible!

Taylor Wellington doesn't do relationships. She learned a long time ago that they were a recipe for heartache. However, she does do flings—steamy affairs that burn hot...and brief. And her sexy new contractor, Thomas "Mac" Mackenzie, has her thinking about burning up some sheets. Problem is, now that she's got him right where she wants him, she can't seem to stop playing with fire.

At the start, Mac is in perfect agreement with Taylor—they'll keep things hot and light, then walk away when they're done. But for reasons he can't explain he doesn't want to end this affair. In fact, he wants more. So now he'll just have to use some seductive persuasion to convince her that this is too good to let go....