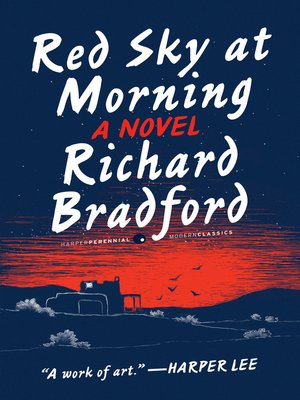 "Red Sky at Morning is a minor marvel: it is a novel of paradox, of identity, of an overwhelming YES to life that embraces with wonder what we are pleased to call the human condition. In short, a work of art." — Harper Lee

Hailed by the Washington Post Book World as "a sort of Catcher in the Rye out West," Richard Bradford's Red Sky at Morning is the classic coming-of-age story set during World War II about the enduring spirit of youth and the values in life that count.

In the summer of 1944, Frank Arnold, a wealthy shipbuilder in Mobile, Alabama, receives his volunteer commission in the U.S. Navy and moves his wife, Ann, and seventeen-year-old son, Josh, to the family's summer home in the village of Corazon Sagrado, high in the New Mexico mountains. A true daughter of the Confederacy, Ann finds it impossible to cope with the quality of life in the largely Hispanic village and, in the company of Jimbob Buel—an insufferable, South-proud, professional houseguest—takes to bridge and sherry. Josh, on the other hand, becomes an integral member of the Sagrado community, forging friendships with his new classmates, with the town's disreputable resident artist, and with Amadeo and Excilda Montoya, the couple hired by his father to care for their house.

Josh narrates the story of his fateful year in Sagrado and, with irresistibly deadpan, irreverent humor, describes the events and people who influence his progress to maturity. Unhindered by his mother's disdain for these "tacky, dusty little Westerners," Josh comes into his own and into a young man's finely formed understanding of duty, responsibility, and love.