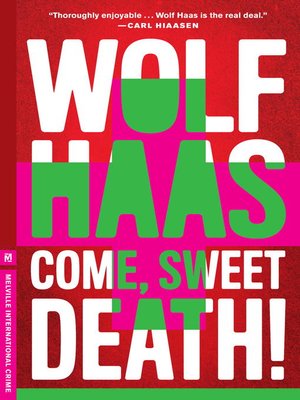 View more libraries...
Another dose of hilarity and mayhem from the author Carl Hiaasen calls "the real deal"

In this winner of the German Thriller Prize, ex-cop Simon Brenner, as part of his never-ending quest to get as far away from being a cop as he can, takes a job as an ambulance driver in downtown Vienna.

It's a hair-raising job, though, made more so by the tendency of the other EMTs to place bets on how many red lights they can run. Even worse, Brenner's new employer has a problem: its major competitor is somehow listening in on radio communications and beating his unit to every pickup. Knowing his past on the force, Brenner's boss asks him to act like a cop and investigate. Meanwhile, is it Brenner's paranoia or are certain wealthy elderly patients who are essentially healthy dying more quickly than they should?

It isn't long before Brenner's life is in real danger, and once again it will take a certain amount of booze, pills, and bad behavior for our man to survive being a cop one more time.