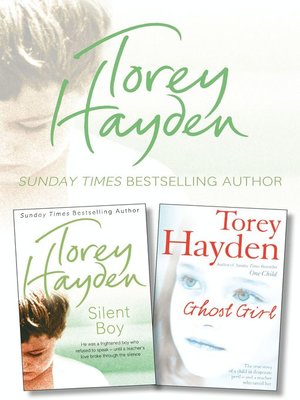 Sunday Times bestselling author Torey Hayden is back with a combined volume of her deeply moving books Silent Boy and Ghost Girl, which each tell the true story of a teacher's perseverance to rescue disturbed and trapped children from the darkness.

Silent Boy tells the story of fifteen-year-old Kevin, who hadn't spoken a word in eight years. He was considered hopeless and incurable but Hayden refused to believe it. With unwavering devotion and gentle, patient love, she set out to free him -- and slowly uncovered a shocking violent history and a terrible secret that an unfeeling bureaucracy had simply filed away and forgotten.

In the poignant Ghost Girl, Hayden meets Jadie who never spoke, never laughed, never cried. But nothing in Torey Hayden's experience had prepared her for the nightmare Jadie revealed to her when finally persuaded to break her self-imposed silence. Hayden could not close her ears... or her heart. A little girl was trapped in a living hell of unspeakable memories. And it would take every ounce of courage, compassion, and love that one remarkable teacher possessed to rid the "Ghost Girl" of the malevolent spirits that haunted her.

More about Torey Hayden
Silent Boy and Ghost Girl 2-in-1 Collection
Copy and paste the code into your website.
New here? Learn how to read digital books for free