The Bride and the Bargain

ebook ∣ The Hunt for Cinderella 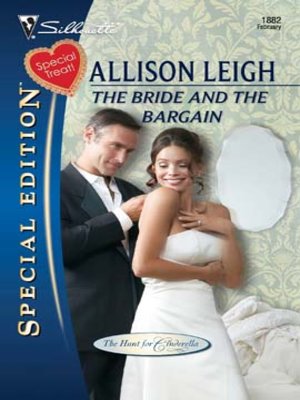 The Hunt for Cinderella


If the running shoe fits...

As head of his family's Seattle-based software empire, workaholic Grayson Hunt was married to the job. Then Dear Old Dad issued Gray and his brothers an ultimatum--find brides, fast, or lose their fortunes. Gray was at wit's end--until he literally ran into the perfect candidate on his favorite jogging path. But did humble school librarian Amelia White have a hidden agenda?

This cinderella will wear it!

Amelia was going to teach this billionaire-in-training that his actions had consequences--and make him pay for what he had done to her sister.

But when she signed up for this marriage of convenience, she didn't know she was signing away her heart in the bargain. Could she stick to her plan the more she fell for the man?

The Hunt for Cinderella