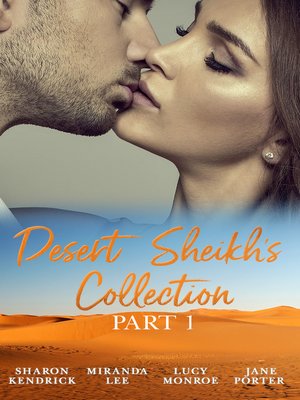 FictionRomanceShort Stories
The Sultan's Bought Bride Princess Nicolette Ducasse refused to let her sister marry Sultan Malik Roman Nuri of Baraka. So she travelled to his faraway kingdom to tell him the wedding was off, never expecting that Malik would be one seriously sexy sultan! The Desert Prince's Mistress Multimillionaire tycoon Darian Widlman made an instant decision to hire beautiful Lara Black. She was the face for his new advertising campaign. But there was one problem–he wanted her both professionally...and personally, as his mistress! Their mutual attraction was electric. There were scorching days and hot nights, until Darian made an ourtrageous discovery that would change his whole life–and Lara's.... He was the illegitimate heir to a wealthy desert kingdom–and a desert prince! Also included... The Sheikh's Bartered Bride & Sold to the Sheikh
FictionRomanceShort Stories

Jane Porter loves central California's golden foothills and miles of farmland, rich with the sweet and heady fragrance of orange blossoms. Her parents fed her imagination by taking Jane to Europe for a year where she became passionate about Italy ...

Desert Sheikhs Collection
Copy and paste the code into your website.
New here? Learn how to read digital books for free