Report of the County Chairman 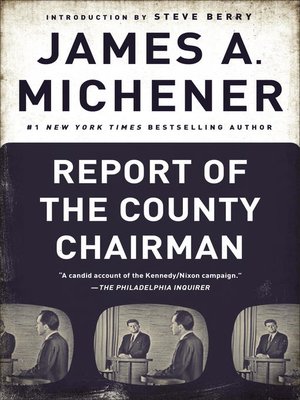 View more libraries...
James A. Michener, the acclaimed author of sweeping historical blockbusters, chronicles his personal involvement in one of the most dramatic elections of the twentieth century: the presidential race between John F. Kennedy and Richard Nixon. A relative newcomer to politics, Michener served as the Democratic chairman in his native Bucks County, Pennsylvania, in a rural battleground precinct where the major controversies of the day—notably Kennedy’s Catholicism—brought cultural divides to the forefront. First published shortly after the 1960 election, Report of the County Chairman remains an intimate, gripping account of the power of grassroots political involvement.

BONUS: This edition includes an excerpt from James A. Michener's Hawaii.

Praise for Report of the County Chairman

“Fascinating . . . The personalities are vividly and vigorously sketched—the workers, the volunteers, the hatchet men, the pros and . . . key figures on the barnstorming tour.”—Kirkus Reviews