The WPA Guide to Idaho 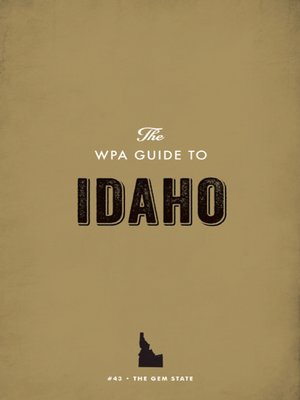 During the 1930s in the United States, the Works Progress Administration developed the Federal Writers' Project to support writers and artists while making a national effort to document the country's shared history and culture. The American Guide series consists of individual guides to each of the states. Little-known authors—many of whom would later become celebrated literary figures—were commissioned to write these important books. John Steinbeck, Saul Bellow, Zora Neale Hurston, and Ralph Ellison are among the more than 6,000 writers, editors, historians, and researchers who documented this celebration of local histories. Photographs, drawings, driving tours, detailed descriptions of towns, and rich cultural details exhibit each state's unique flavor.
While Idaho is well known for its potatoes, this WPA Guide introduces readers to many other facets of life in this Pacific Northwestern state. The first installment of the American Guide Series to be published, the guide documents the young state's response to the Great Depression by reinvigorating its science, technology, and agriculture industries. Natural elements of the Gem State are recognized, as well as the rich history of the American Indians in the area. Great photography and detailed histories enhance this historically significant guide.