The WPA Guide to California 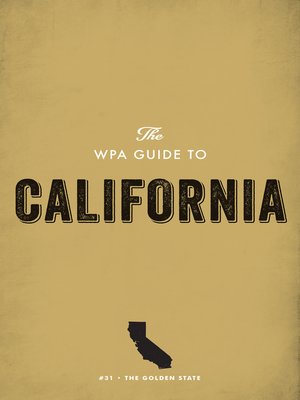 During the 1930s in the United States, the Works Progress Administration developed the Federal Writers' Project to support writers and artists while making a national effort to document the country's shared history and culture. The American Guide series consists of individual guides to each of the states. Little-known authors—many of whom would later become celebrated literary figures—were commissioned to write these important books. John Steinbeck, Saul Bellow, Zora Neale Hurston, and Ralph Ellison are among the more than 6,000 writers, editors, historians, and researchers who documented this celebration of local histories. Photographs, drawings, driving tours, detailed descriptions of towns, and rich cultural details exhibit each state's unique flavor.
The guide to California stands out among the rest of the WPA guides for the quality of its writing, photographs, and pen-and-ink drawings. The Golden State contains much diversity of people, places, and things, and the WPA Guide expertly reflects and records the eclectic quality of this quintessentially American state. Published in 1939, the guide's essays on history cover everything from the gold rush to the movie industry at the nascence of Hollywood's golden age, and its back-road tours through California's coastal fishing villages and mountain mining towns still provide a splendid alternative to freeways.