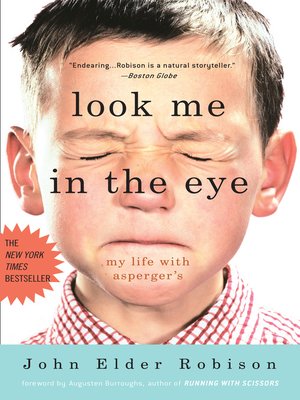 Look Me in the Eye

My Life with Asperger's

"As sweet and funny and sad and true and heartfelt a memoir as one could find." --from the foreword by Augusten Burroughs

Ever since he was young, John Robison longed to connect with other people, but by the time he was a teenager, his odd habits--an inclination to blurt out non sequiturs, avoid eye contact, dismantle radios, and dig five-foot holes (and stick his younger brother, Augusten Burroughs, in them)--had earned him the label "social deviant." It was not until he was forty that he was diagnosed with a form of autism called Asperger's syndrome. That understanding transformed the way he saw himself--and the world. A born storyteller, Robison has written a moving, darkly funny memoir about a life that has taken him from developing exploding guitars for KISS to building a family of his own. It's a strange, sly, indelible account--sometimes alien yet always deeply human.

JOHN ELDER ROBISON is the New York Times bestselling author of Look Me in the Eye, Be Different and Raising Cubby. He lectures widely on autism and neurological differences, and is a member of the Interagency Autism Coordinating Committee of the U...

More about John Elder Robison
Look Me in the Eye
Copy and paste the code into your website.
New here? Learn how to read digital books for free