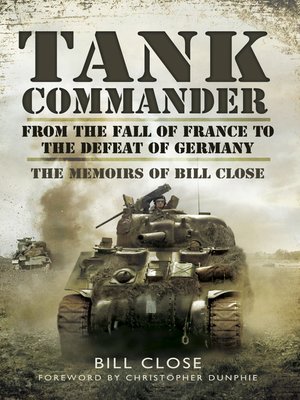 Bill Close had a remarkable war. In campaign after campaign, from the defense of Calais in 1940 to the defeat of Germany in 1945, he served as a tank commander in the Royal Tank Regiment - and he survived. His tanks were hit eleven times by enemy shellfire and he bailed out. He was wounded three times. He finished the war as one of the most experienced and resourceful of British tank commanders, and in later life, he set down his wartime experiences in graphic detail. His book is not only an extraordinary memoir - it is also a compelling account of the exploits of the Royal Tank Regiment throughout the conflict. As a record of the day-to-day experience of the tank crew of seventy years ago - of the conditions they faced and the battles they fought – it has rarely been equaled.

Major Bill Close joined the Royal Tank Regiment as a trooper in 1933 and was posted to the 3rd Battalion RTR in 1934 where he held every non-commissioned rank up to regimental quartermaster sergeant before being commissioned in the field in 1942. ...

More about Bill Close
Tank Commander
Copy and paste the code into your website.
New here? Learn how to read digital books for free