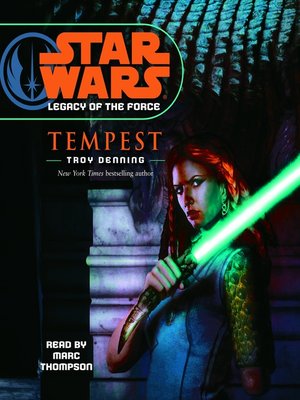 FictionScience FictionThriller
Forty years after the Battle of Yavin a dangerous new era in the Star Wars epic begins–the revelations are shocking, the stakes desperate, and the enemy everywhere.
As civil war threatens the unity of the Galactic Alliance, Han and Leia Solo have enraged their families and the Jedi by joining the Corellian insurgents. But the Solos draw the line when they discover the rebels' plot to make the Hapan Consortium an ally–which rests upon Hapan nobles murdering their pro-Alliance queen and her daughter.
Yet the Solos' selfless determination to save the queen cannot dispel the inescapable consequences of their actions, that will pit mother against son and brother against sister in the battles ahead. For as Jacen Solo's dark powers grow stronger under the Dark Jedi Lumiya, and his influence over Ben Skywalker becomes more insidious, Luke's concern for his nephew forces him into a life-and-death struggle against his fiercest foe, and Han and Leia Solo find themselves at the mercy of their deadliest enemy . . . their son.
From the Paperback edition.
FictionScience FictionThriller

Troy Denning is the New York Times bestselling author of Star Wars: Tatooine Ghost, Star Wars: The New Jedi Order: Star by Star, and the Star Wars: Dark Nest Trilogy, as well as Pages of Pain, Beyond the High Road, The Summoning, and many other no...

More about Troy Denning
Tempest
Copy and paste the code into your website.
New here? Learn how to read digital books for free