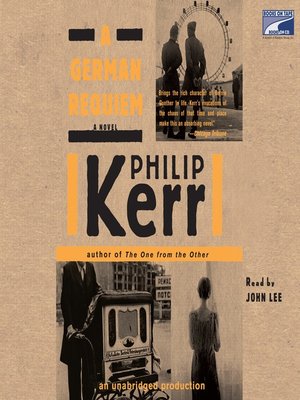 View more libraries...
A supremely disturbing thriller set in the ruins of the Third Reich by an internationally acclaimed master of historical suspense.
Bernie Gunther had his first brush with evil as a policeman in 1930s Berlin and came to know it intimately as a private eye under the Nazis, when each case drew him deeper into the enormities of the regime. Now the war is over and Gunther's in Vienna, trying to clear an old friend of the murder of an American officer. Amid decaying imperial splendor he traces concentric circles of depravity that lead him to a former head of the Gestapo. Gripping, frightening, and pungently atmospheric, A GERMAN REQUIEM demonstrates Philip Kerr's power to take his listeners hostage.
"Echoes of Raymond Chandler but better on his vivid and well-researched detail than the master." –Evening Standard (London)
"Kerr has the talent to . . . take you places you have never been."–The Washington Post Book World
From the Compact Disc edition.