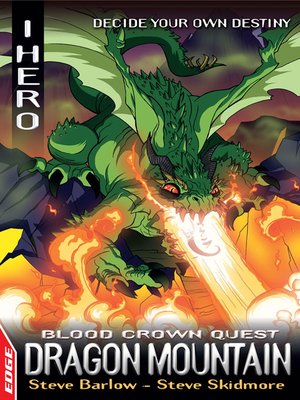 We dare you to take on the Red Queen in this choose-your-own-destiny Blood Crown Quest!

The Red Queen has seized the Ruby of Death and raised an army of the dead.

Now, with her husband, the necromancer Mortha, they plan to find the remaining

three rubies and cast a permanent shadow over the world. YOUR quest is to find the

Blood Crown rubies before the Red Queen, and use them to destroy her. You have

discovered the Ruby of Power in the Lost City of the Desert, but the Red Queen has

the Ruby of Death! In Dragon Mountain YOU must travel to the mountains of the north

to find the Dragon princess and the Ruby of Seeing. You are the hero of this book.

Only you can decide your own destiny...

Hot spin-off from the I HERO series, which has now sold over 80,000 copies! YOU are pitted against the evil Red Queen and her dark minions as she attempts to collect four rubies to rebuild the Blood Crown. Written by the award-winning 2Steves!

As 50% of the Two Steves, Steve Barlow has written over 160 books with Steve Skidmore since their first published work appeared in 1988. Born in Crewe, he was educated at Crewe Grammar School, Warwick University and Nottingham University before a ...

Steve Skidmore writes with Steve Barlow. Together they are Britain's most popular comedy writing and performing double act for young people. Not surprisingly, they are known as The 2 Steves!The 2 Steves met over twenty years ago when they were bot...

More about Steve Skidmore
EDGE: I, Hero Quests: Dragon Mountain
Copy and paste the code into your website.
New here? Learn how to read digital books for free