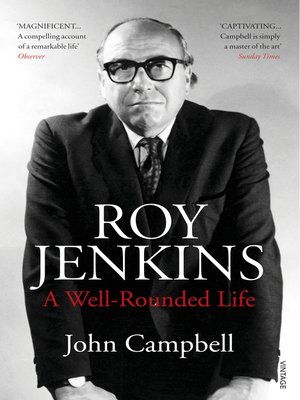 Shortlisted for the 2014 Samuel Johnson Prize

Shortlisted for the 2014 Costa Biography Award

Longlisted for the 2015 Orwell Prize

Roy Jenkins was probably the best Prime Minister Britain never had. But though he never reached 10 Downing Street, he left a more enduring mark on British society than most of those who did.

As a radical Home Secretary in the 1960s he drove through the decriminalisation of homosexuality and the legalisation of abortion. An early and consistent advocate of European unity, he played a decisive role in achieving British membership first of the Common Market and then of the European Union. Then in 1981, when both the Conservative and Labour parties had moved sharply to the right and left respectively he founded the centrist Social Democratic Party (SDP) which ultimately paved the way for Tony Blair's creation of New Labour. On top of all this, Jenkins was a compulsive writer whose twenty-three books included best-selling biographies of Asquith, Gladstone and Churchill. He was the embodiment of the liberal establishment with a genius for friendship who knew and cultivated everyone who mattered in the overlapping worlds of politics, literature, diplomacy and academia. His biography is the story of an exceptionally well-filled and well-rounded life.