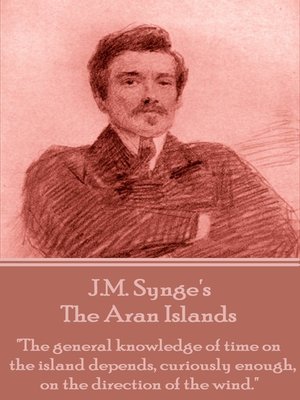 Edmund John Millington Synge was born on April 16th 1871 born in Newtown Villas, Rathfarnham, County Dublin on 16 April 1871 the youngest son of eight children. After abandoning a career in music he began to write. A crushing rejection in love caused him to abandon Ireland for much of his life but his writing continued to achieve greater heights. In 1896 he visited Italy before returning to Paris. Later that year he met W. B. Yeats, who encouraged Synge to live for a while in the Aran Islands and then return to Dublin and devote himself to creative work. That same year he joined with Yeats, Lady Gregory, and George William Russell to form the Irish National Theatre Society, which later would become the Abbey Theatre. In 1897 Synge suffered his first attack of Hodgkin's disease, a form of untreatable cancer at the time, and also had an enlarged gland removed from his neck. In 1898, he spent his first summer on the Aran Islands and then continued for the next five collecting stories and folklore and perfecting his Irish but continuing to live in Paris for the rest of the year. The result is this rather fine play which we publish here for you. Synge died of Hodgkin's disease just weeks short of his 38th birthday on March 24th 1909 trying to complete his last play, Deirdre of the Sorrows. He was buried in Mount Jerome Graveyard, in Dublin.