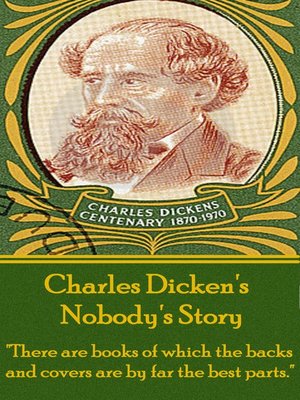 Charles Dickens (1812-1870) is regarded by many readers and literary critics to be THE major English novelist of the Victorian Age. He is remembered today as the author of a series of weighty novels which have been translated into many languages and promoted to the rank of World Classics. The latter include, but are not limited to, The Adventures of Oliver Twist, A Tale of Two Cities, David Copperfield, A Christmas Carol, Hard Times, Great Expectations and The Old Curiosity Shop. Here we bring you a selection of his quite remarkable short stories: Nobody's Story, The Streets – Morning, The Begging-Letter Writer, The Drunkard's Death, Gin-Shops, The Prisoners' Van, The Runaway Couple, Shabby-Genteel People, Bill-Sticking, The Streets – Night, The Child's Story, The Poor Relation's Story and Charles Dickens – A Short Biography

Nobody's Story
Copy and paste the code into your website.
New here? Learn how to read digital books for free