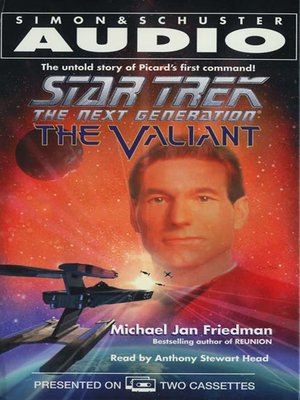 Star Trek: the Next Generation

FictionLiteratureScience Fiction
Three hundred years ago, the S.S. Valiant was destroyed during an ill-fated attempted to cross the legendary Galactic Barrier. Starfleet had always assumed that the Valiant had perished with all hands aboard, until a pair of unusual humanoids arrive at Starbase 209, claiming to be the descendants of a handful of Valiant survivors who found refuge on an M-Class planet beyond the Barrier.

Even more shocking, the visitors warn that a hostile alien species, the Nuyyad, are preparing to invade our galaxy. Starfleet orders the U.S.S. Stargazer to investigate at once.

Lieutenant Commander Jean-Luc Picard is second office on the Stargazer and yet to command a vessel of his own. He soon develops a special bond with one of the visitors, a strikingly beautiful woman who has inherited mysterious psychic abilities from her alleged Starfleet ancestors. But can Picard truly trust her?

His doubts deepen when the Stargazer is ambushed by Nuyyad warships. Picard finds himself in command - trapped on the wrong side of the Barrier, cut off from Starfleet. Not only the Stargazer, but perhaps the entire Federation, may depend on the decisions he must make.

The Valiant is a gripping saga that explores an untold chapter in the life of Jean-Luc Picard - and reveals the making of a captain!

More about Michael Jan Friedman
The Valiant
Copy and paste the code into your website.
New here? Learn how to read digital books for free