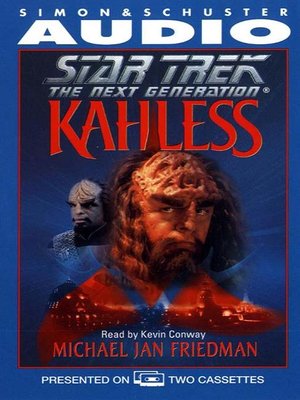 FictionScience Fiction
For 1500 years, the Klingons have revered him as their first emperor, the legendary warrior who united their people and taught them the meaning of honor, but the truth of his incredible life has been shrouded in myth and fables... until now.

A clone of the original Kahless now reigns as emperor, but the discovery of an ancient scroll throws the legends into doubt and threatens to tear the Klingon empire apart. Surrounded by treachery and rumors of revolt, this new Kahless can trust no one - except Captain Jean-Luc Picard and Lieutenant Worf of the U.S.S. Enterprise.
FictionScience Fiction

More about Michael Jan Friedman
Kahless
Copy and paste the code into your website.
New here? Learn how to read digital books for free