ebook ∣ Historians, Race, and the Meaning of Reconstruction 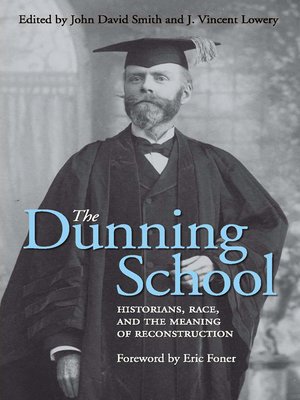 From the late nineteenth century until World War I, a group of Columbia University students gathered under the mentorship of the renowned historian William Archibald Dunning (1857—1922). Known as the Dunning School, these students wrote the first generation of state studies on the Reconstruction — volumes that generally sympathized with white southerners, interpreted radical Reconstruction as a mean-spirited usurpation of federal power, and cast the Republican Party as a coalition of carpetbaggers, freedmen, scalawags, and former Unionists.

Edited by the award-winning historian John David Smith and J. Vincent Lowery, The Dunning School focuses on this controversial group of historians and its scholarly output. Despite their methodological limitations and racial bias, the Dunning historians' writings prefigured the sources and questions that later historians of the Reconstruction would utilize and address. Many of their pioneering dissertations remain important to ongoing debates on the broad meaning of the Civil War and Reconstruction and the evolution of American historical scholarship.

This groundbreaking collection of original essays offers a fair and critical assessment of the Dunning School that focuses on the group's purpose, the strengths and weaknesses of its constituents, and its legacy. Squaring the past with the present, this important book also explores the evolution of historical interpretations over time and illuminates the ways in which contemporary political, racial, and social questions shape historical analyses.