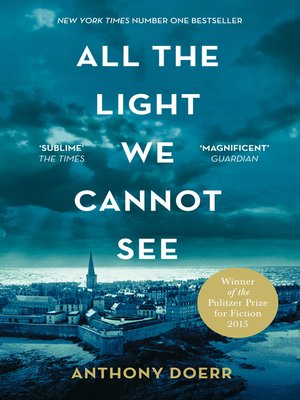 All the Light We Cannot See

FictionHistorical Fiction
WINNER OF THE 2015 PULITZER PRIZE FOR FICTIONNATIONAL BOOK AWARD FINALISTNEW YORK TIMES BESTSELLERWINNER OF THE CARNEGIE MEDAL FOR FICTION A beautiful, stunningly ambitious novel about a blind French girl and a German boy whose paths collide in occupied France as both try to survive the devastation of World War II Marie-Laure has been blind since the age of six. Her father builds a perfect miniature of their Paris neighbourhood so she can memorize it by touch and navigate her way home. But when the Nazis invade, father and daughter flee with a dangerous secret. Werner is a German orphan, destined to labour in the same mine that claimed his father's life, until he discovers a knack for engineering. His talent wins him a place at a brutal military academy, but his way out of obscurity is built on suffering. At the same time, far away in a walled city by the sea, an old man discovers new worlds without ever setting foot outside his home. But all around him, impending danger closes in. Doerr's combination of soaring imagination and meticulous observation is electric. As Europe is engulfed by war and lives collide unpredictably, 'All The Light We Cannot See' is a captivating and devastating elegy for innocence.
FictionHistorical Fiction

Anthony Doerr is the bestselling and prize-winning author of The Shell Collector, About Grace, Four Seasons in Rome and Memory Wall. In 2007 Granta named him as one of their 21 Best Young American Novelists and in 2011 he won the Sunday Times EFG ...

More about Anthony Doerr
All the Light We Cannot See
Copy and paste the code into your website.
New here? Learn how to read digital books for free