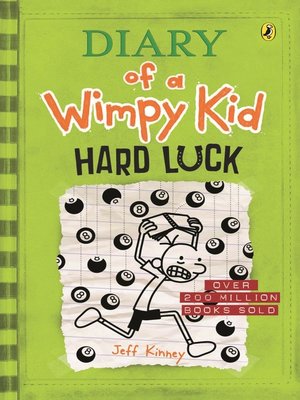 View more libraries...
Jeff Kinney's 8th book of this hilarious and highly successful series, and Greg Heffley and his friends now have a whole new set of adventures.
Greg Heffley's on a losing streak. His best friend, Rowley Jefferson, has ditched him, and finding new friends in middle school is proving to be a tough task. To change his fortunes, Greg decides to take a leap of faith and turn his decisions over to chance. Will a roll of the dice turn things around, or is Greg's life destined to be just another hard-luck story?
Readers love the Diary of a Wimpy Kid series. The USA Today, Publishers Weekly, Wall Street Journal, and # 1 New York Times bestsellers:
'In the publishing world, Kinney is rock star.' NPR's 'Backseat Book Club'
'Diary of a Wimpy Kid is bent on world domination.' Time magazine
'One of the most successful children's series ever published.' Washington Post
'A big hit with reluctant readers and anyone looking for a funny book.' School Library Journal