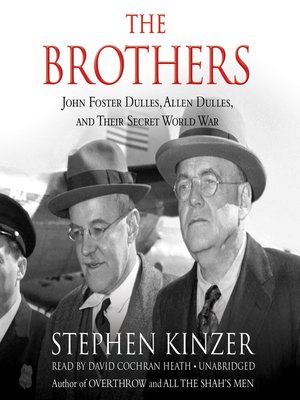 A joint biography of John Foster Dulles and Allen Dulles, who led the United States into an unseen war that decisively shaped today's world

During the 1950s, when the Cold War was at its peak, two immensely powerful brothers led the United States into a series of foreign adventures whose effects are still shaking the world.

John Foster Dulles was secretary of state while his brother, Allen Dulles, was director of the Central Intelligence Agency. In this book, Stephen Kinzer places their extraordinary lives against the backdrop of American culture and history. He uses the framework of biography to ask: Why does the United States behave as it does in the world?

The Brothers explores hidden forces that shape the national psyche, from religious piety to Western movies—many of which are about a noble gunman who cleans up a lawless town by killing bad guys. This is how the Dulles brothers saw themselves, and how many Americans still see their country's role in the world.

Propelled by a quintessentially American set of fears and delusions, the Dulles brothers launched violent campaigns against foreign leaders they saw as threats to the United States. These campaigns helped push countries from Guatemala to the Congo into long spirals of violence, led the United States into the Vietnam War, and laid the foundation for decades of hostility between the United States and countries such as Cuba and Iran.

Stephen Kinzer is the author of Reset, Overthrow, All the Shah's Men, and numerous other books. An award-winning foreign correspondent, he served as the New York Times' bureau chief in Turkey, Germany, and Nicaragua and as the Boston Globe's Latin...

More about Stephen Kinzer
The Brothers
Copy and paste the code into your website.
New here? Learn how to read digital books for free