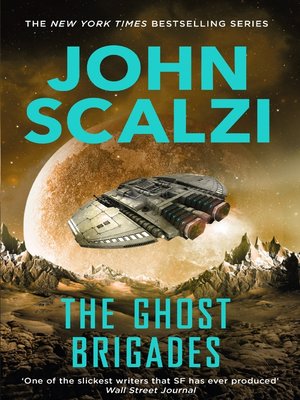 Hard-core science fiction at its very best, the sequel to his extraordinary Old Man's War
They are the special wing of the Colonial Defence Forces, elite troops created from DNA of the dead and turned into the perfect soldiers for the CDF's toughest operations. The universe is a dangerous place for humanity, as three hostile races combine to halt our further expansion into space. Their linchpin is a turncoat scientist, Charles Boutin, who unfortunately knows the CDF's biggest military secrets. And to prevail against this alliance, they must find out why Boutin did what he did.
Jared Dirac is the only human able to provide answers, being a superhuman hybrid created form Boutin's own DNA. Jared's brain should therefore be able to access Boutin's electronic memories ... but when that appears to fail, Jared is instead passed on to the Ghost Brigades. Then, just as time is running out, Boutin's memories slowly begin to surface within him ... but all this while the enemy is planning something much worse for mankind than just military defeat.
PRAISE FOR THE OLD MAN'S WAR SERIES
"Clever dialogue, fast-paced story and strong characters." The Times
"Great fun" Daily Telegraph