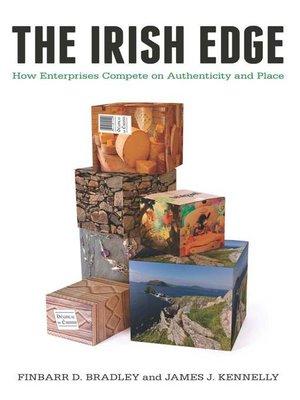 How Enterprises Compete on Authenticity and Place

Telling the stories of Irish businesses that have successfully integrated their Irishness with the demands of the global marketplace, The Irish Edge is intended as an inspiration to entrepreneurs/innovators and owners of export-oriented SMEs. The Irish Edge tells the stories of successful Irish enterprises that have survived and thrived through the recession, building on culture, tradition, place, identity, language and sustainability. The enterprises in this book compete, not only on the basis of identity, but by adapting themselves to what is now called the modern 'experience' economy. Such businesses include: Inis Meáin, which the Financial Times headlined 'A Chic Knitwear Outpost in the Aran Islands'; Cnoc Suain, a restored 17th century hill village in Co. Galway; Ballymaloe Cookery School; animation enterprise Cartoon Saloon; our liquor and brewing enterprises, including new craft beers; and our food industry, including global brands such as Glenisk and Flahavans. The Irish Edge proposes an economic recovery based on such strong, identity-driven, modern enterprises that use local and traditional resources, along with technology, to create something appealing and new.

Finbarr Bradley teaches about managing and financing green ventures at University College Dublin and is a former professor at DCU and NUI Maynooth.

More about James J. Kennelly
The Irish Edge
Copy and paste the code into your website.
New here? Learn how to read digital books for free