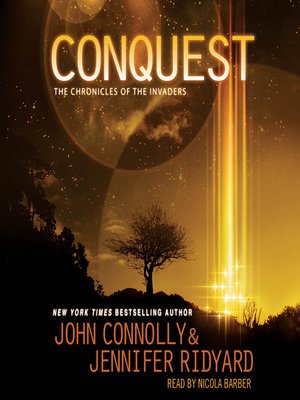 FictionScience Fiction
The first in a stunning new science fiction trilogy, Conquest introduces a world where humanity has been conquered by a powerful alien rulership—unless a group of young rebels can unlock their powers and help rescue humankind from its terrible fate.
Earth is no longer ours. . . .

It is ruled by the Illyri, a beautiful, civilized, yet ruthless alien species. But humankind has not given up the fight, and Paul Kerr is one of a new generation of young Resistance leaders waging war on the invaders.

Syl Hellais is the first of the Illyri to be born on Earth. Trapped inside the walls of her father's stronghold, hated by the humans, she longs to escape.

But on her sixteenth birthday, Syl's life is about to change forever. She will become an outcast, an enemy of her people, for daring to save the life of one human: Paul Kerr. Only together do they have a chance of saving each other, and the planet they both call home.

For there is a greater darkness behind the Illyri conquest of Earth, and the real invasion has not yet even begun. . . .
FictionScience Fiction

John Connolly is the author of the Charlie Parker series of mystery novels, the supernatural collection Nocturnes, and with Jennifer Ridyard the Samuel Johnson and Chronicles of the Invaders series for younger readers. He lives in Dublin, Ireland....

Jennifer Ridyard was born in England and grew up in South Africa, where she worked as a journalist for many years. Conquest and Empire are the first two novels in the Chronicles of the Invaders series with her partner, John Connolly, who she lives...

More about Jennifer Ridyard
Conquest
Copy and paste the code into your website.
New here? Learn how to read digital books for free