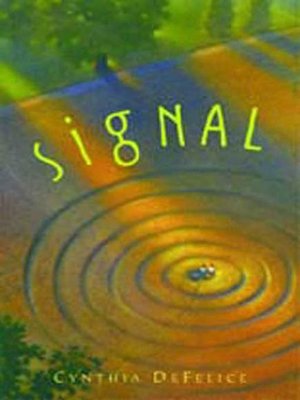 One day while running on the trail near his house in upstate New York, Owen McGuire meets a girl with startling green eyes and bloody cuts all over her body who seems to be utterly alone. Her name is Campion, after the wildflower that is an alien species in the area—alien meaning "from someplace else"—and Campion claims to come from someplace else entirely, a planet called Home. She plans to signal her parents to come pick her up in their spaceship. Owen agrees to help, and as he does, he feels happier than he has in a long time: his mother died a year and a half ago, and now he and his workaholic father live together like two planets on separate orbits, in a new house far from his friends. What will he do when Campion asks him to come with her into outer space, away from his lonely life on Earth?

In this moving novel, two friendless kids search the night sky for something to believe in—but discover that they've found what they need right here on Earth.

Cynthia DeFelice is the author of many bestselling titles for young readers, including the novels Wild Life, The Ghost of Cutler Creek, Signal, and The Missing Manatee, as well as the picture books, One Potato, Two Potato, and Casey in the Bath. H...

More about Cynthia DeFelice
Signal
Copy and paste the code into your website.
New here? Learn how to read digital books for free