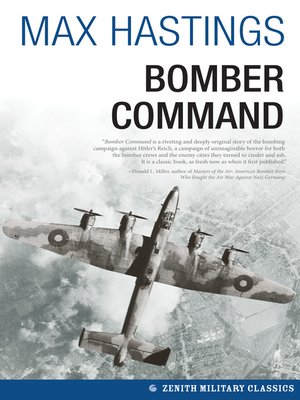 Bomber Command's air offensive against the cities of Nazi Germany was one of the most epic campaigns of World War II. More than 56,000 British and Commonwealth aircrew and 600,000 Germans died in the course of the RAF's attempt to win the war by bombing. The struggle in the air began meekly in 1939 with only a few Whitleys, Hampdens, and Wellingtons flying blindly through the night on their ill-conceived bombing runs. It ended six years later with 1,600 Lancasters, Halifaxes, and Mosquitoes, equipped with the best of British wartime technology, razing whole German cities in a single night. Bomber Command, through fits and starts, grew into an effective fighting force.

In Bomber Command, originally published to critical acclaim in the U.K., famed British military historian Sir Max Hastings offers a captivating analysis of the strategy and decision-making behind one of World War II's most violent episodes. With firsthand descriptions of the experiences of aircrew from 1939 to 1945—based on one hundred interviews with veterans—and a harrowing narrative of the experiences of Germans on the ground during the September 1944 bombing of Darmstadt, Bomber Command is widely recognized as a classic account of one of the bloodiest campaigns in World War II history. Now back in print in the U.S., this book is an essential addition to any history reader's bookshelf.