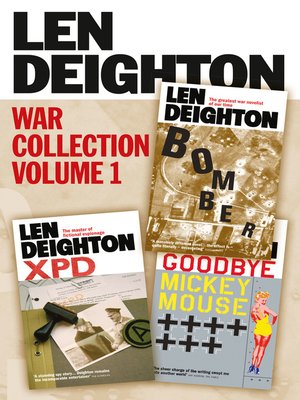 Three classic novels of the Second World War by the 'greatest war novelist of our time', together in one e-bundle for the first time.

During the years 1939-45 Europe was in the midst of a titanic struggle for supremacy, involving man and machine. The drama, horror, romance and excitement of that time is captured in three acclaimed novels by Len Deighton:

Bomber -- an epic masterpiece that tells the story of a fictional RAF bombing raid on a German industrial town in 1943. As events unfold we share the experience from the perspective of the bomber crew, their friends and family, the Luftwaffe pilots trying to stop them and the German townsfolk who will endure the incendiary onslaught.

XPD -- 1940: With Winston Churchill missing, a private aircraft takes off from a small town in France, while Adolf Hitler, the would-be conqueror of Europe, prepares for a clandestine meeting near the Belgian border. For more than forty years the events of this day have been Britain's most closely guarded secret. Anyone who learns of them must die, with their file stamped: XPD -- expedient demise...

Goodbye Mickey Mouse -- a vivid evocation of what it's like to be at war, and in love, in wartime England. Two American fighter pilots are worlds apart but form a bond flying escort missions over Germany in the winter of 1944. Yet their friendship will be tested away from the heat of battle with far-reaching consequences for them and those they love.

Born in London, he served in the RAF before graduating from the Royal College of Art (which recently elected him a Senior Fellow). While in New York City working as a magazine illustrator he began writing his first novel, 'The Ipcress File', which...