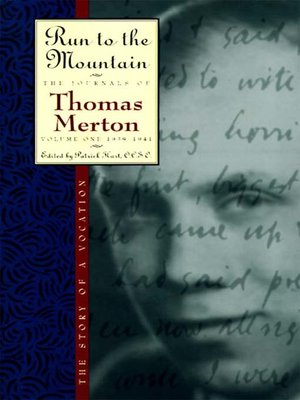 Run to the Mountain

When Thomas Merton died accidentally in Bangkok in 1968, the beloved Trappist monk's will specified that his personal diaries not be published for 25 years -- presumably because they contained his uncensored thoughts and feelings. Now, a quarter of a century has passed since Merton's death, and the journals are the last major piece of writing to appear by the 20th century's most important spiritual writer.

The first of seven volumes, Run to the Mountain offers an intimate glimpse at the inner life of a young, pre-monastic Merton. Here readers will witness the insatiably curious graduate student in New York's Greenwich Village give way to the tentative spiritual seeker and brilliant writer. Merton playfully lists everything from his favorite lines of poetry and songs to the things he most loves and hates.

Thomas Merton was an inveterate diarist; his journals offer a complete and candid look at the rich transformations of his adult life. As Brother Patrick Hart, general editor of the series notes, "Perhaps his best writing can be found in the journals, where he was expressing what was deepest in his heart with no thought of censorship. With their publication we will have as complete a picture of Thomas Merton as we can hope to have."

Thomas Merton (1915-1968) was a Trappist monk, writer, and peace and civil rights activist. Merton's works have had a profound impact on contemporary religious and philosophical thought. He is best known for his autobiography, The Seven Storey Mou...

More about Thomas Merton
Run to the Mountain
Copy and paste the code into your website.
New here? Learn how to read digital books for free