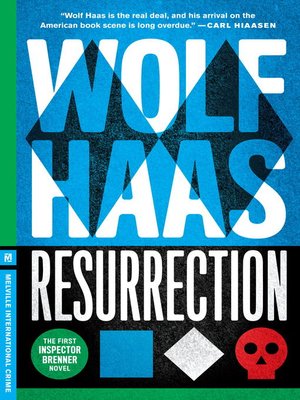 View more libraries...
"Wolf Haas is the real deal, and his arrival on the American book scene is long overdue."
—Carl Hiaasen

THE FIRST INSPECTOR BRENNER NOVEL
The darkly comic book that launched the bestselling series . . .
Wolf Haas is firmly established as one of the world's bestselling crime novelists. And now the novel that introduced Simon Brenner, Haas's inimitable protagonist—a detective who always gets where he's going, but never the way anyone else would—is available for the first time  in English.
When the corpses of two Americans turn up on a ski lift in the idyllic Swiss town of Zell, former police inspector Brenner, who needs a new job, not to mention more migraine medication, agrees to investigate the deaths for an insurance company.
But as Brenner gets acquainted with the finer points of curling, community theater, and certain sexy local schoolteachers, he notices one thing starkly missing: any semblance of a clue.
Until he stumbles across a buried secret that might have explosive consequences.