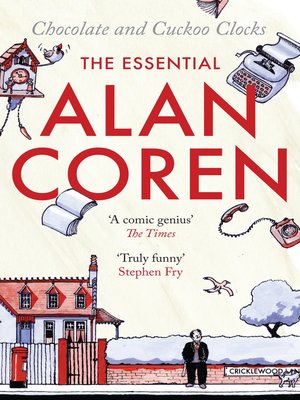 Edited by his children, Giles and Victoria, Chocolate and Cuckoo Clocks is an anthology of writing from the former editor of Punch and Radio 4 national treasure Alan Coren, who died in October 2007.

In a prolific forty-year career Alan Coren wrote for The Times, Observer, Tatler, Daily Mail, Mail on Sunday, Listener, Punch and the New Yorker, and published over 20 books including The Sanity Inspector, Golfing for Cats and The Collected Bulletins of Idi Amin. Even twenty years ago he estimated that he had published six million words, or ten copies of War and Peace.

This anthology draws together the best of his published work as new unpublished autobiographical material.

Coren was one of Britain's most prolific and now much-missed humourists, finding the comedy of life all around him and rendering it, hilariously and compellingly, in polished and witty prose which will be eagerly devoured by his loyal fanbase.

Alan Coren was born in 1938 in Southgate, North London. From East Barnet Grammar School, he went to Wadham College, Oxford on a scholarship, and then to Yale and Berkeley to study modern American literature. He abandoned plans for an academic career when Punch magazine, to which he had been contributing articles from America, offered him a job on its staff. He became deputy editor in 1969 and editor in 1978. From 1988 he wrote a hugely popular column for The Times, which continued until the end of his life. He died in 2007.

'The book is a fitting testament to a man who gave millions joy.' Richard Morrison, The Times

'The warmth and wit of these pieces stand the test of time.' Independent on Sunday

'A charming compilation of some of the best from a man widely regarded as the funniest writer in English.' Weekend Herald

'A wonderful and un-put-downable example of a great humorist’s craft.' Launceston Examiner