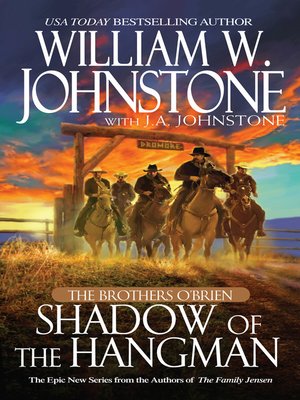 Shadow of the Hangman

FictionWesternThrillerHistorical Fiction
The Greatest Western Writer Of The 21st Century

William W. Johnstone, the USA Today bestselling master of the epic Western, continues the saga of the four O'Brien brothers--bravehearted men working and fighting the untamed lands of New Mexico Territory to build a dream of America.

When a farmer's wife is murdered, an innocent man is accused: Patrick O'Brien. The book-loving brother had shared his love of literature with the woman, but her husband claims she spurned Pat's advances and that's why he killed her. Now it looks like Patrick will swing from the gallows--especially after his lawyer is targeted, too. Pat's brothers try to track down the real killer, but time is running out. A team of hired guns has come to town, and they're choking the family ranch like a noose. For the brothers O'Brien, it's judgment day. And justice will be served--in a hellstorm of blood and bullets. . .
FictionWesternThrillerHistorical Fiction

More about William W. Johnstone
Shadow of the Hangman
Copy and paste the code into your website.
New here? Learn how to read digital books for free